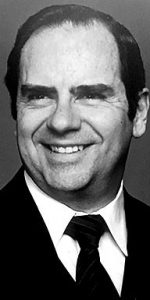 Mr. Deahna was born in Buffalo, the son of Frederick and Caroline Deahna. He was of German-American heritage.

Mr. Deahna was a dedicated Catholic his entire life. As a teenager, he attended Canisius High School. He then graduated from the University of Buffalo School of Business Administration with a degree in accounting. He married his wife, Carmela, shortly after college graduation.

Mr. Deahna worked in various accounting positions at Moore Business Forms in Niagara Falls, Marine Midland Bank in Buffalo and Graham Manufacturing in Batavia, where he held the role of controller.

In retirement, Mr. and Mrs. Deahna split their time between Amherst and Sarasota, Florida.

Mr. Deahna was passionately focused on his marriage and raising and nurturing his sons, Scott and Jay. He was a dedicated family man and enjoyed close relationships with his wife and sons his entire life. The family spent many happy days boating on the Niagara River and Lake Erie.

In addition to his wife and sons, Mr. Deahna is survived by his sister, Diane Ciminelli. A memorial service will be held in the summer of 2020 in Buffalo. Memorials to Tidewell Hospice House in Sarasota, Florida or the Moffett Cancer Center in Tampa, Florida.

You may have missed